Buzz! Buzz! Buzz! That’s my phone vibrating, under my pillow, where I placed it before falling asleep, after completing my 4th night shift for the week.

Apparently, the buzzing sound woke me up from la la land. I looked at my phone to know who had called me, it was one of my friends. I realized that I actually missed 3 calls from her plus a text.

It was quite unusual, I thought to myself “Is her house on fire?”  The last time we chatted over the phone was probably a,year ago. I thought it courteous to call back to inquire on her situation.

“Hey girl, hope all is well,” I said to her. She responded that she was doing great, but had something very important to discuss with me.

Now, y’all know that if someone uses the adjective “very” before a word such as ” important ” , in my Nigerian accent , o ti serious o! Lol!

I was eager to know what it was! Was she in the States? Did she win the lottery? Zillions of questions running through my mind.

“Are you in any serious relationship ?” She asked me.  I increased the volume of my phone, to be sure that I was hearing the right words. Then I asked her to explain what she meant. She rephrased her question, saying, ” is there a man in your life that you are seeing and he is going to marry you?

I stuttered as I responded ” not really, I’m just dating, and it hasn’t happened yet”. Then I asked to know why she was asking all these questions, because for 3 missed calls, I’m thinking something more serious is happening….just saying.

My girl dropped the bomb!!!

“Well, my cousin is looking for someone to marry. Let me be honest with you and keep it real. My cousin just broke up with his girlfriend. He wants to visit the States and most importantly marry an American citizen there” My friend said.

I responded, “are there no pretty girls in Nigeria? Are you saying that the reason why he is visiting the States is to marry someone who is legally here, so that he can reside in the United States?”

“Absolutely ! ” she  responded.  My friend further stressed on how great of a guy , her cousin was,  and how she thought of me as the best match for such situation.  For few seconds,  I thought that I was dreaming..lol! Like seriously is that why you called me? Do I look like someone involved in contract marriages?

This gentle man calls me and genuinely confirms that his ultimate reason for talking to me is because, he was looking for an American citizen to marry so that he could be legal in the States.

This joker had the audacity to ask me how much money I was making at my job. In the space of 36 hrs, it felt like a tsunami just disrupted my serenity lol!  My phone kept buzzing,  zillion times with numerous texts and missed calls from this gold digger of a guy. Some one that I barely know, asking if I had feelings for him. Wonders shall never cease!

Long story short! I decided to end this madness before, it metastasizes to  something malignant and beyond my capacity, to control, lol! 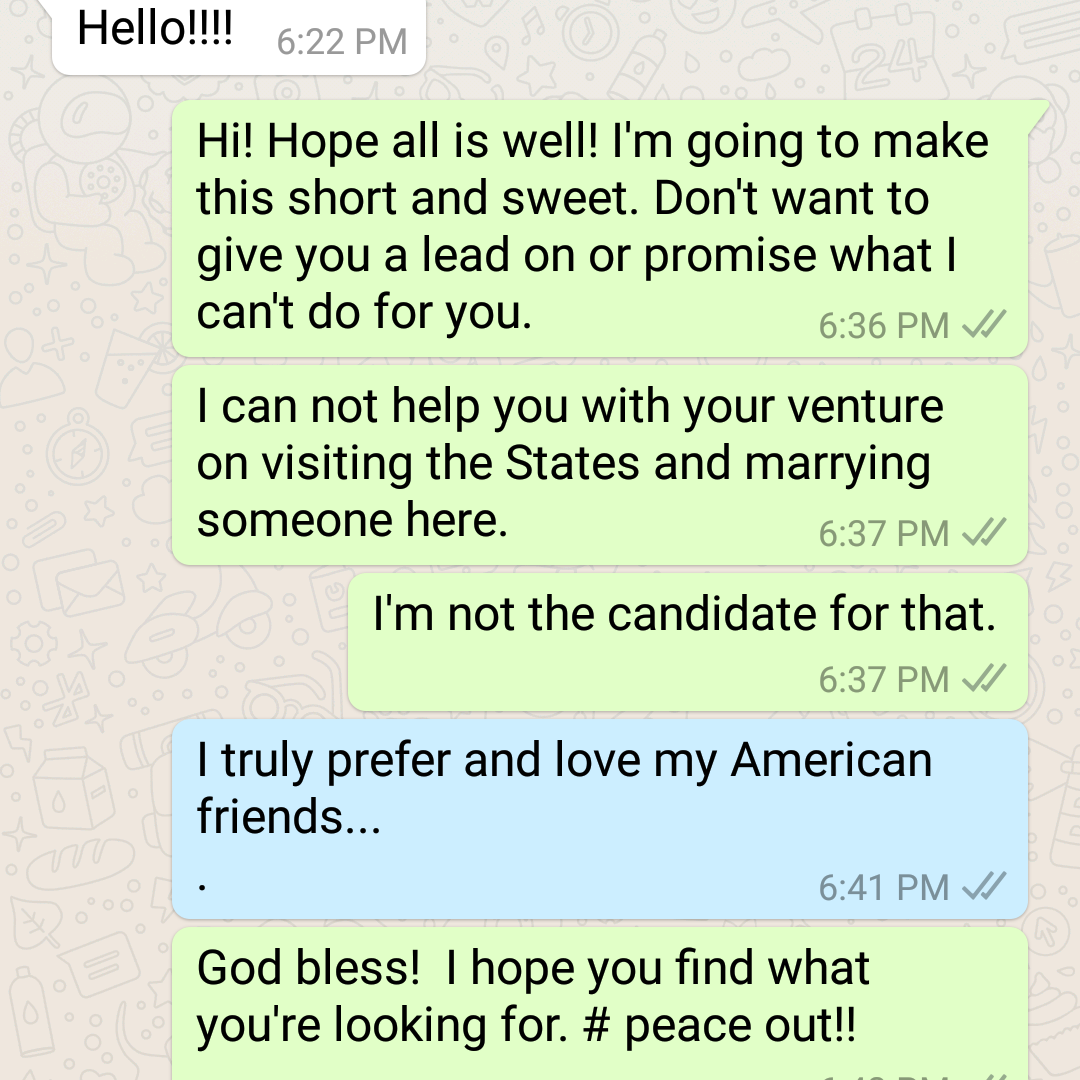 The book of Amos 3:3 states that ” can two walk together, except they agree” (KJV).

Certainly, we are not obligated to settle for that which is less than our expectation.

Now the outcome of this scenario would have been different, if I was interested. But, the reality is that, I am not the candidate for the job, lol!

As technology has became sophisticated, so is the art of marriage and falling love. Call me old fashioned,  it doesn’t really matter. I am of the opinion that marriage is a holy covenant before God. It is an intentional act. One might argue that some have been successful with  similar scenarios. My question is, what happens to the unlucky ones?

At the end of the day, ” as you make your bed, so you must lie in it” (Daniel J. Boorstin). Always remember that and you’ll thank me later , lol!

Well, this is all for now, catch you on the next episode!  Thanks for viewing!

2 thoughts on “The waiting game 2- I am not the candidate!!!LOL” Leave a comment ›